In 1721 Cefntrenfa was known as, ‘Tyr Keven Tranfa vawre,1It would be tempting to claim that the second element is a corruption of ‘trinfa’ (battlefield).  However, the 1721 spelling of ‘tranfa’ (expanse) is the most likely, especially as it is a perfect description of the location, namely a ridge overlooking an expanse of land.

Cefntrenfa sits on a hill above Erryd south of Cilycwm. It is described in Pevsner as being, ‘on the crest looking east over the Towy…. late 18th century with gabled centre and a minimally Venetian centre feature.’ 2

The Lewis and Bowen family of Cefntrenfa were, a lesser gentry family with an old pedigree, their house, ‘looking out over an extensive and beautiful landscape’ 3 The Lewises claimed descent from Rhodri Mawr (c830-78) and via family ties to Ystradffin and the tribe of Selyf a king of Dyfed c 1070.There was a James ap Lewys born at Cefntrenfa in 1600. The last of the family to live there was the Reverend William Bowen who was buried at Cilycwm in 1833 aged 51.

Cefntrenfa was the home of James Lewis in the late 17th century, who was followed by his son Reverend Lewis Lewis vicar of Cil-y-cwm who died in 1780 aged 98. It was his only child Mary that married Captain Marmaduke Bowen, ‘Keventrenfa vaure and vach’ were settled on her on her marriage. Marmaduke proved to be a difficult husband, he was cited for brawling and violence in the church where his father was curate, who in turn was also accused of drunkeness and neglect of duty. Unfortunately Marmaduke and his son Lewis Lloyd were involved in a terrible local scandal, they were tried for being accomplices in the Glanareth murder but were acquitted. Lewis Lloyd had 3 sons Lewis and John were both surgeons and William was a clergyman.2

Lewis Bowen the younger married Melesina Clay the poetess who wrote the topographical poem ‘Ystradffin’ which amongst other things describes the uniquely beautiful countryside of the Upper Tywi Valley which is still recognisable nearly two centuries later. After his death she spent much of her remaining years travelling, but she never forgot her early married life in Cilycwm, ending up in Natal in South Africa in a farmhouse she named Kefentrenfa.

“on the left hand, rising still,

Stands Cefntrenfa, on the hill,

Casting a side-long glance of pride

It is possible that the ‘large closet heretofore used as a study’ at Cefntrenfa referenced below was Melesina’s writing room.

In September 1812 the family home Ceventrenfa House was advertised to let; on the ground floor there were two parlours, a servants room, kitchen, dairy, and other offices and on the upper floor four bedrooms, with a large closet ‘heretofore used as a study’; with two large gardens planted with fruit trees, ‘Fruit trees now in a fine state of bearing adjoining thereto is a piece of excellent meadow land of about eight acres, a pump of pure water is close to the kitchen door.’ a three stalled stable with a dovecot over it , close to a paddock planted with many fruit trees of about two acres in front of the house. It goes on to praise Cefntrenfa’s high and healthy position beautiful views and facilities for angling and shooting. A pond fed by a spring formed by a retaining wall is still there at the beginning of the steep slope down to the Towy.

In the early 19th century Cefntrenfa had its demesne and separate aspects of ‘mansion’ and farm however as the century wore on, ‘the distinction between House and Farm was abandoned. Today it keeps what it must always have had, an indefinable air of modest distinction, emphasised by its extensive and remarkable range of farm buildings’ 3

It is clear from many documents held at the National Library of Wales that the Bowens mortgaged and eventually lost Cefntrenfa to their family connections at Neuadd-fawr.  The owner of Cefntrenfa Mansion in the tithe was William Davys Harries of Neuadd-fawr and the occupier was Reverend John Williams who was living there with his wife Margaret. There were 16 acres of gardens orchards and fields with the mansion.

Robert Powell’s Book 1852 is a notebook with some records of harvest labourers at Cefntrenfa in the 1850’s to 1888. Many servants and daughters of nearby houses and pubs in Llandovery are doing some harvest work there. By 1911 the Powell family had been living at Cefntrenfa for nearly half a century, and the ‘mansion’ had reduced in status to a farmhouse. Thomas Powell who was fifty, and Ann his wife who was fifty-seven had had six children, three of whom reached adulthood. Their daughter Margaret 23 still lived at home working in the farm’s dairy, their son John Rees aged fourteen works on the farm, and Annie May Griffiths aged four, grand-daughter. In addition to this there were two general servants and a waggoner. 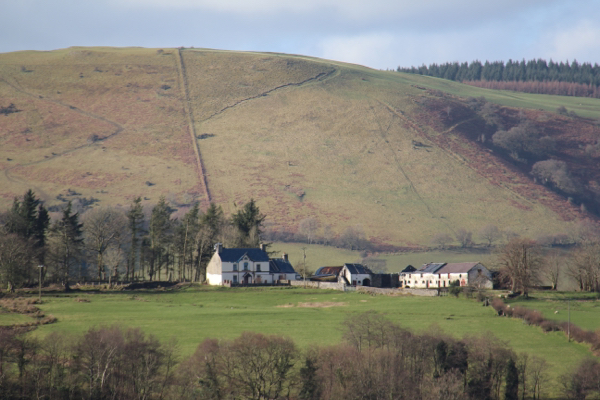