Cilposte ‘Nook or corner of the posts’

If ‘poste’ is the plural noun ‘postau’ (posts), ‘Cilposte’ could be interpreted as ‘nook or corner of the posts’.  ‘Cil haul’ is used to describe a place shaded from the sun, and ‘post’ can mean ‘ray of sunlight’.  However, the plural form of ‘post’ in this context is usually ‘pyst’.

Gwaen bron y cwpwl (Gwaun, wet meadow. Bron, breast of hill.  It is possible,  ‘cwpl’  here is ‘yoke of oxen’, i.e. the slope could be ploughed by a pair of oxen .

Cae cwinten now called Cae war tŷ. It is thought that there was a residence called ‘Quintain’ on Ystrad-ffin.   Mrs Bowen, in her poem Ystradffin refers to the sport and offers an explanation,

‘…But the sports of Calangauaf are almost forgotten … The apple and the lamp, is a humble kind of Quintain. It is simply thus,—a post, or stick, about five feet high, is fixed to the floor, with a pivot at the top, on which turns a horizontal stick, equally divided; at one end is an apple, at the other a lighted candle; it is swung briskly round, and while in full motion, the candidate approaches with his hands behind him, and endeavours to catch the apple with his teeth.’1

There is another reference to a Quinton in Cil-y-cwm when a Jenkins Lewis of ‘Quinten’ in Cil-y-cwm is made bankrupt in 1861. 2 ‘Quinten’  is also listed as a residence in the Cil-y-cwm Easter Offerings for 1776. 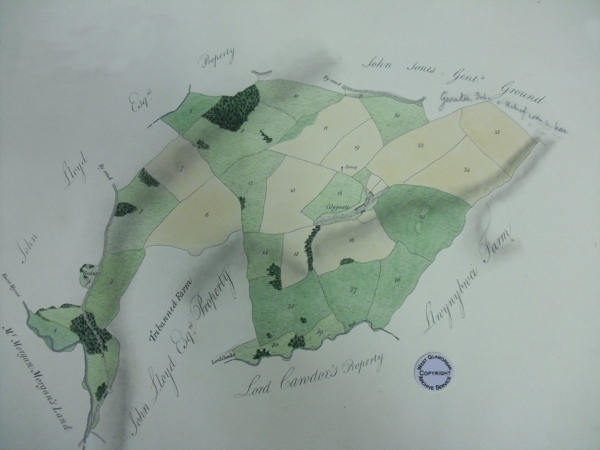