The ruins of Cwmerchon lie above the ‘Afon Merchon’ on the flanks of Mynydd Mallaen. It has been suggested that the river’s name might originally have been ‘Afon Erchon’, ‘Erch’ is ‘dark’ or ‘dappled’ and could refer to the colour of the river.

In 1777 Cwmerchon is property of Londin Jones, Gent. 1 By 1814 in the will of John Jones Penygrose, he leaves Cwmerchon and PenyGroes to his sister Mary Edwards.2

Cwmerchon and Penygroes are advertised to be sold by auction in August 1817 at The Black Swan in Llandovery. It is described thus, ‘an excellent farmhouse and suitable out offices…a hundred acres….in the occupation of Mr David William Morgan….There is a very extensive and well sheltered sheepwalk… the country abounds with game and there are grouse to be found within a short distance of the premises.’ 3

In 1818 William Morgan, of Cwmerchon, aged 63 years is buried in Cilycwm is his will he leaves the bulk of his estate to his wife and his ‘cuppord bedstead’ and Welsh bible to his nephew Isaac Davies.4

In David Jones’s will of 1834, “…Also I give and bequeath all the farming stock and crop of a farm called Cwmerchon in the parish of Cilycwm….Also I give to my mother [Margaret Jones] a lease on Cwmerchon farm aforesaid which I hold as Tenant to David Jones Esq Banker. ….” 5 The landowner of Cwmerchon in the tithe was also a David Jones and the tenant of this 92 acre farm was Isaac Jones. This David Jones also owns Gwalrhedin, Cwmynis, Penrhiw, and Penygroes, and is possibly David Jones of the Black Ox Bank fame.

The census records for Cwmerchon cease after 1901 and the house was uninhabitable by the1940’s when the farm was bought by Lawrence C. Hill for the fishing. Hill wrote, ‘The Vale of Towy’ in 1947, where he loosely disguises Cilycwm as ‘Kilvalley’,

‘Here’s what’s left of the old farmhouse now owned apparently by a colony of Jackdaws. They must have been here for years. Look! The old chimney is chocked up with twigs.  That must have been a fine old fireplace in its time. I can just picture it with a roaring wood fire going nicely, an armchair on either side under the canopy, and suspended on a wrought iron hook the traditional crochan or large pot in which there would be always boiling water. And quite probably there would be a roasting spit, a frying pan hanging on one side and a copper skillet used for the annual jam making on the other. The large baking oven seems to be blocked in but there must have been one when this old place was inhabited. Living in such an isolated place, you can quite understand why the farmer and his family had to provide for home-made fare, especially in the winter time, and life seemed to centre around the kitchen fireplace.’ 6 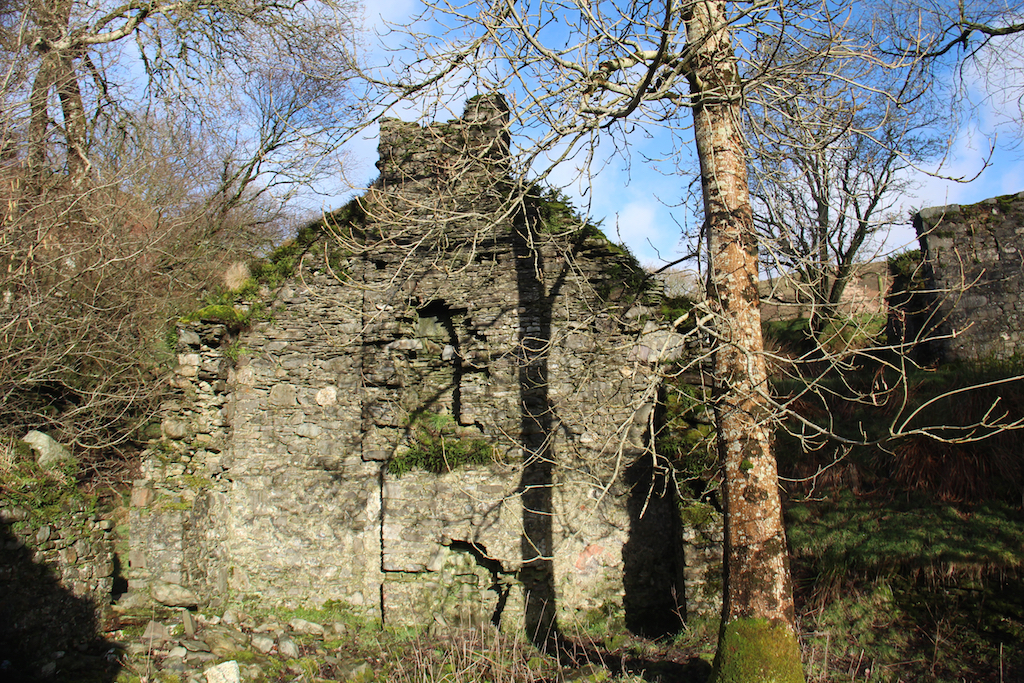