Cwm Rhaeadr belonged to the Cawdor estate in the tithe and John Morgan was the tenant followed by one Silvanus Jones, the last resident in the valley being Kari Phillips.

The farm was used as a base for Sunday Schools, prayer meetings etc as a branch of Tynewydd Methodist Chapel in the late 19th Century and early 20th Century.

There is a hollowed out space behind the back of the barn underneath the outside staircase which many old places had as a kennel for the farm dogs.

A Box tree still remains near the barn and old fashioned double daffodils still flower where the garden once was.

At present the barn and its fields are used by the Scouts as a campsite.  The house was removed by the Forestry Commission to prevent “squatters” occupying the place which was deemed as a fire risk to the whole wooded area.

Cae Pen Milwr (either‘the field of a soldier’s head’ or ‘field of the head soldier). ‘Pen-milwr, pen draig oedd arnaw’ (chief warrior, his was a dragon’s head), wrote Gruffudd ab yr Ynad Coch of Llywelyn ap Gruffydd the last prince of an independent Wales before being conquered by Edward I who was killed in battle and his head hewn from his body in 1282. However, having looked at the map, there is a more likely explanation is that the fields together form the shape of a soldier’s helmet.

Cae’r Potato might be a reference to the custom whereby the cottager was allowed to plant potatoes in a neighbouring farmer’s fields in return for labour on the farm, with mechanisation in the mid 20th century this practice had entirely died out (J.G. Jenkins, 1976:21).

Cae Ffoes Ddu (black ditch) There was a photo of an Oak Tree in this field which was used by a famous Toogood’sSeed Co.

Cae Pwll Llif (‘llif’ could refer to ‘flood’ or a saw pit) A Saw Pit is a pit over which felled trees would be placed ready to be chopped into useable planks and is where we get the expression ‘underdog’. The top sawyer ‘ Top Sawyer’ or ‘Top Dog’ (Pen-Llifiwr). His role was to guide the saw along the marked line on the timber lifting the saw on the up stroke and following on the down stroke, whilst the bottom sawyer or underdog (Is-Llifiwr) had the harder and more uncomfortable job. He would be working in semi-darkness deep in the pit, he would pull on the downstroke of the saw and push on the up stroke whilst being covered by falling sawdust and sweating steadily with his feet in water.

Cae Stafell could suggest that there was a cave there as Twm Siôn Cati’s Cave is known as Ystafell Twm Siôn Cati.

Cae Portis ‘portis means a wattle barrier used to close a gap in a hedge). R.F. Peter Well in ‘The Place-names of Devynock Hundred’ suggests that, ‘portis’ could be a corruption of ‘portres’ (fort).

Bryn Eris not ‘Bryn Nerys’ as Nerys is a recent name, however the similar sounding ‘Aeres’ means heiress and another candidate could be ‘Efrllys’ which means vetch. 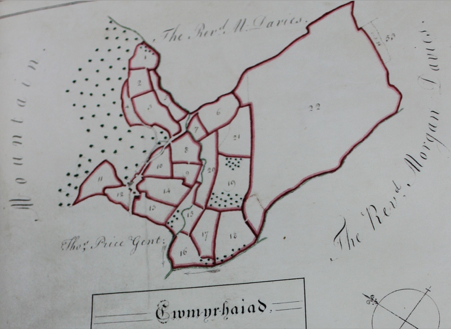 (Cil-y-cwm)£3.0.0Interesting history / folklore associated with farm / dwellingThe farm was used as a base for Sunday Schools, prayer meetings etc as a branch of Soar Methodist Chapel, Tynewydd  in the late 19th Century and early 20th Century.Interesting family historyCensus 1841,1861- Silvanus Jones; 1881 – Thomas Williams; 1891 – John Davies; 1901 – Jane Williams; 1911 – David Jones.  Other families – Richards, William Williams.  Last resident Kari Phillips.Are any items from the farm / dwelling currently housed in a musem? If so, please give detailsAn image of an oak tree from Cwm Rhaeadr was used by a seed company to sell its seeds (possibly a booklet).  Circa 1930’s ??   Company believed to be called Toogood’s of SouthamptonInteresting flora and faunaBox tree still remains near the barn.Other information not listed aboveAt present the barn is used by the Scouts as a campsite.  The house was removed by the then Forestry Commission to prevent “squatters” occupying the place which was deemed as a fire risk to the whole wooded area.  The last resident Kari Phillips was working for the Forestry Commission when the house was demolished. 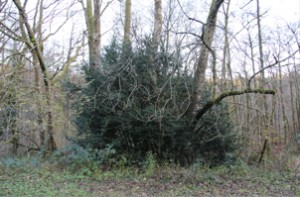 ……..RIDES FROM LLANDOVERY. On the slope of the Vedw , are the remains of an old lvy-clad cottage, once inhabited by  old Daniel a travelling minstrel whose stock in trade was his harp …….  Close by, there is a very pretty waterfall called Cwm Rhaiadr , while in afield lying at the foot, is a very interesting Carn, supposed to have been placed over the grave of a roman officer who fell in battle and bearing a Latin inscription 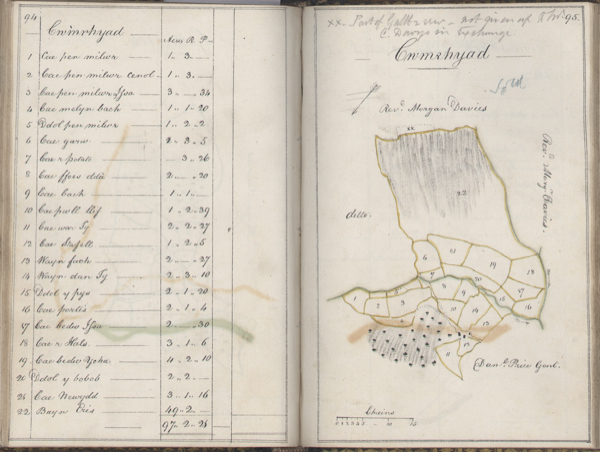 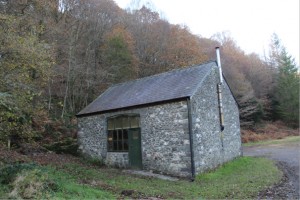