Cwrt-henri is currently part of Llwyn-siôn near Cilycwm. The ruin can still be seen on the left just before the turning to Llwyn- siôn coming from the village. It may have been named after a rather grander house, “There is another Court Henry, just to the north of Cil-y-cwm. The house is now a ruin. It may well have been so named by its one-time owner William Herbert, who died in 1711. This William Herbert was the grandson of the John Herbert, lawyer of Carmarthen, who purchased Court Henry (Llangathen)” 1

In 1711Cwrt Henry was owned by William Herbert, he was the grandson of the John Herbert, lawyer of Carmarthen, who purchased Court Henry in Llangathen.  Cwrt Henry’s fields are shown on the 1777 Campbell estate map of Glangwenlais. as part of, ‘A piece belonging to David Edwards Esq. [Fforddfawr?] & Wm Lloyd Gent [Cwrt Henry]’. 2 In 1795 William Lloyd and wife Ann moved from Cwm-y-to Fach, Llanwrda to Court Henry Cilycwm. They had seven children, the second of whom was Lewis Loyd (1768-1858), a banker, who became ‘one of Britain’s richest men’. 3 William Lloyd dies in 1800 and soon after this his daughter, Jane, and husband Lewis Davies moved into Cwrt Henry.

William Lloyd’s son, Lewis Loyd, “rode on a white horse to Manchester to study” and become a Unitarian minister.  As the Revd Lewis Loyd he married Sarah Jones, daughter of Manchester banker John Jones. Loyd gave up the ministry to take a partnership in his father-in-law’s bank and became the founder of the London branch of Jones, Loyd & Co., retiring in 1844. When he died in 1858 his estate was worth £2 million.  He had one son, Samuel Jones-Loyd, a banker and politician, who became Baron Overstone in 1850. 4 The owner in the tithe was Lewis Lloyd a ‘banker of Manchester and London’ and the tenant of the 23 acre holding was Lewis Davies.

Dorrie Theophilus once told Dai Edwards that there was an old lady living here until 1925, a poor old widow who couldn’t pay her rent, Campbell Davys ‘sent her away’ – but strangely never let the place again and it fell into ruin. The ruins of Cwrt-henri remain and intriguingly some of the beams are engraved with initials.

There was another stone lined well at Cwrt Henri that never ran dry by the turning to Home Farm. There was a pump with a cast iron handle. The house had stables on one side and an old saw pit. It also had a brick lined well with steps down into it. Dai Edwards remembers ‘priming the pump’ with a bucket of water. There was also an orchard to one side of the house. 5

Cae’r Allt (more recently called “The Plantation” (a field up Home Farm drive, to left of the track up onto mountain) 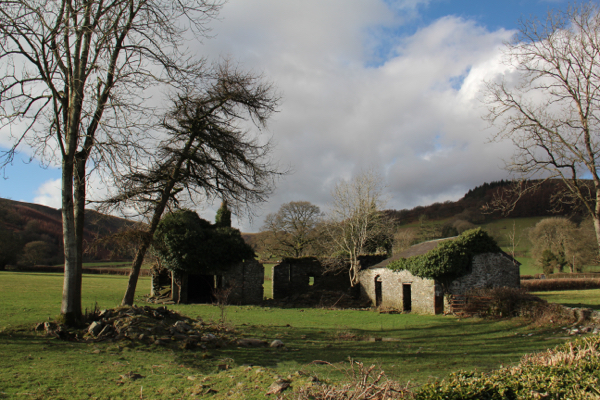