‘Erydr’ is the Welsh for ‘ploughs’ and ‘erydd’ means ploughman, but the first recorded use of ‘erydd’ (ploughman) wasn’t untll 1862, therefore, it has to be discounted in this case.  ‘Erydd’ is also a variant of ‘eryr’, which has several meanings, including ‘eagle’ (the bird itself and as represented on a Roman standard) and ‘prince’ or ‘chief’.  Roman coins have been found on the way down to the old ford at nearby Glan-rhyd-erryd, there is also a Roman fortlet in the field above it and there is evidence that this ford was part of a Roman road going over to the gold mines at Pumpsaint. However, as we have no evidence of ‘Erryd’ ever being known as ‘Rhyd yr Erydd’, we have to suppose that the name stems from ‘Y Rhyd’ (The Ford).

Erryd was owned by the Neuadd Fawr estate in the tithe and the occupiers of the Mansion House and 15 acres was a Mrs Price.

Erryd is an early Georgian House grade 2* listed, ‘with a distinct air of grandeur’. 1 It is a gentry house with older origins.  It is located south of Cilycwm in an elevated position above the River Towy with fine views to the Western Beacons. The Erryd estate including tenanted farms totalling 1200 acres was sold in July 1812 and became part of the Neuadd Fawr estate. There was a Ladies walk and a Haha in the grounds.

Erryd was the seat of the Griffiths family from the early 18th Century. Margaret Griffiths, widow of John Griffiths, Gent and their son and heir Edward Griffiths, Clerk made a lease /mortgage  in 1746 to the Price family who remained there for several generations. Notable members of the Price family were Daniel Price (Provost – Marshall of Monserrat) Rear Admiral David Powell Price (died.1854 at Petropovloski), Walter Price (Tangier and Demerara) and Howell Price (Surgeon R.N).

By the mid 19th century, Erryd House served as the Vicarage for the parish. Erryd House was later used as the main residence for the farm from the early c. 1920. David and Ann Williams followed by their son , Mr Tom Williams, were tenants from 1871 to 1934.  Mr David Jones took over tenancy in 1934. The house and farm were sold by the Neuadd Fawr estate in 1940 to Mr & Mrs David Jones. Two evacuees from London lived with the Jones family during the war, (Winnie and Ronnie) sadly Erryd had no news of how they fared on their return.

There is an earthwork west of Erryd, A subcircular embanked enclosure, 20-24m in diameter, showing as a dished area, at least 0.3m deep, with only traces of banks; seen when freshly ploughed it could be a Roman military site, possibly a tower emplacement, associated with the road running north-west to south-east about 24m to the north-east, traces of whose metalling is visible following ploughing.

‘Pwll Lewis’ on the River Tywi below Pont Newydd was noted as being a very deep pool, a good spot for a fish. 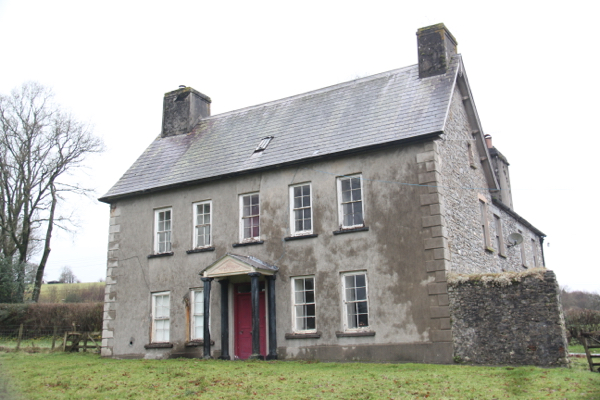