Glanrhosan belonged to the Cawdor estate in the tithe and David Davis was the tenant of this farm and its 196 acres.

In 1861 Janet Thomas aged 64 was described in the census as ‘farmer of 171 acres’ she was living there with William her son aged 32 and Elizabeth her daughter 34, Joshua Prosser visitor 13, David Jones servant 19, Janes Rees servant 18 and  Ann Davies servant 14. In the register of persons entitled to vote for the county of Carmarthen 1872/73 was ‘William Thomas farm and land occupier’. In 1881 William was living at Glanrhosan with his wife Mary 42, and Rolant [?] aged13.

On 16 Jul 1864 ‘Rees, Elizabeth alias Davies, Elizabeth’ was tried for the offence: of murdering her child of 4 months old by poisoning it. She was 19 years old, ‘5ft 0in Complexion: fresh Marital status: Single No.of children: 0’ She was born at ‘Gellyfawr, Llandoisant’ and her last residence was ‘Glanrosant’, Cilycwm where she was a servant. She was acquitted.1

At Cil-y-cwm show on the 4th September 1908, Miss Annie Theophilus of Glanrhosan ‘won first prize 2.6d for best pair of bantams.’ 2 In the 1911 census summary book a Mr Theophilus and 2 females are living at Glanrhosan.

Cilgwyn Issa Lower fair nook. However, ‘gwyn’ (white) could refer to the colour of vegetation.

Wain goch gain ‘cain’ is ‘fair’ fair red marshy ground. Interestingly, one definitiion of ‘cain’ in the third edition of W. Owen Pughe’s Dictionary (1866) is ‘a field of battle’. 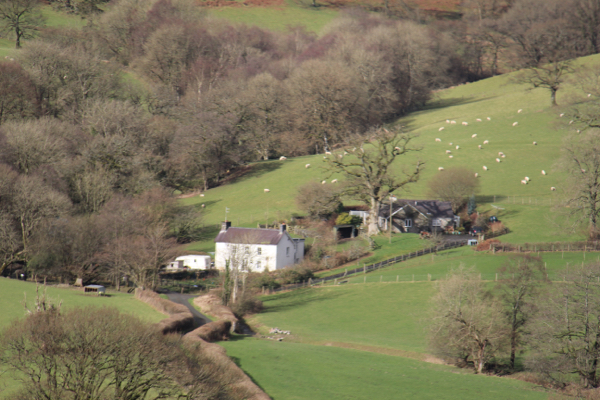