In the 1851 census at ‘Penrhywiare’  William Davies is head of the family aged 40 years, a farmer of 290 acres sheepwalk and 20 cultivated, Mary his wife then 30, and their children, Mary, Sarah, Catherina,  and Morgan Evans his nephew working as the shepherd on the farm aged 17. By 1881 William is now 71 a farmer of 319 acres and Mary his wife is 61, living with Anne their daughter aged  29 unmarried, Daniel son 26 married, and another Dinah daughter unmarried aged 23. William Davies was born in Cilcwm parish in 1809, and married Mary Morgan in 1842 died 1882 age 73

Penrhiwiar is listed as a lead mine owned by North Nantymwyn mining company in 1861 in G.W.Hall’s ‘Metal Mines of Southern Wales’.

In 1898 a newspaper report refers to the ancient custom paying a heriot or mortuary fine upon the death of Lord Cawdor to the Queen, also that a John James, Troedrhiwresger, and Evan Williams, Penrhiwiar, Cilycwm, had purchased freehold property within the manor, they owed a customary alienation fine due to the Lady (Queen Victoria) of the Manor [of Cilycwm]. 2

William Davies, in a descriptive volume on Llandeilo and its neighbourhood, published in 1858, states that Red Grouse were, “common on the Black Mountain but not so plentiful as in former years”. For their colloquial name he gives “Gieir Mynydd”, literally “mountain hens”, preserved in such place-names as Crugiau Ieir on Mynydd Llanllwni and Penrhiwiar, near Rhandirmwyn. Typically, Red Grouse inhabit treeless moorland where their main food plant, ling or heather flourishes, preferring young heather for food but needing older heather for cover and nesting. Cranberry and bilberry also provide a variable food source. Generally, over the last sixty years Red Grouse have progressively declined in numbers due to a multiplicity of factors, including a deterioration in heather quality to less management and chronic overgrazing by sheep (whose numbers per hectare have more than doubled since 1945), periodic epidemics of parasitic diseases and loss of moorland to forestry and agriculture. 3

2001 Redsquirrels were seen feeding in sitka spruce at penrhiwiar in 2001. 4 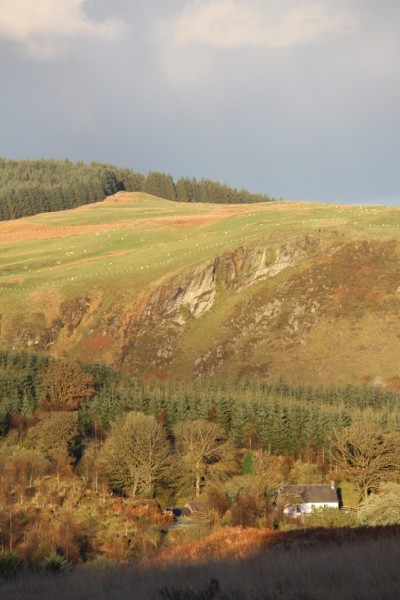