The owner of Rhiwmallaen a farm of 170 acres in the tithe in 1843 was Howell Gwyn and the tenant was David Jones. Howell Gwyn was a large landowner of Dyffryn near Neath he also owned the small scattered Blaensawdde estate in Carmarthenshire of which Rhiwmallaen was a part. Blaensawdde was sold in 35 lots in the Town Hall in Llandovery in 1925.

On the hill and mountain behind Rhiwmallaen called Rhiw Cilgwyn there are the intact remains of several post medieval rabbit warrens,

‘On a high northeast facing slope of Mynydd Mallaen, Carmarthenshire is a group of 6 linear pillow mounds……They range in length from 20m to 10m.’ 1

In Cae Mawr on Cwmfrân-ganol lots of musket balls have been found by metal detectorists, and there has been speculation that this was the site of a battle.

In the 17th century Muckleston Allin of Bwlchtrebbanau was the owner of Rhiwmallaen.2 In the 1841 census David Jones is living there aged 36; in 1851 to 1861 Morgan Morgan; from 1871 to 1911 Thomas was followed by, Rachel then David Lewis.

In October 1880 the Cardiff Times reported,

‘LLANDOVERY.FATAL ACCIDENT.—On Saturday, Thos. Lewis, Rhiwmallan, Cilycwm, farmer, together with Mrs Lewis, his wife, were coming to the market as usual, but when near the railway bridge which .crosses the road near the town, the horse got frightened at the down train which was then passing over the bridge, and bolted off. Mr Lewis, who is about 60 years of age, jumped out of the cart with the intention of stopping the animal, and in the attempt he was knocked down, and the wheel went over his body. Mrs Lewis, who was still in the cart, as the horse being most unmanageable, also jumped out, breaking one of her legs and fracturing an arm. Both Mr and Mrs Lewis were afterwards conveyed in a helpless state to the Six Bells public-house. Dr. Thomas and Dr. Lewis were soon in attendance. Thomas Lewis expired in a few hours, whilst Mrs Lewis was conveyed to her home. Great excitement prevails throughout the town’.3

An extract from the Cambrian Newspaper in 1907 notes a balloon hovering over the village.  It created quite a bit of interest before sailing off over Rhiwmallaen.  It was thought that the balloonist had visited the Rhandir-mwyn Sheep Dog Trials nearby.

The Old house which was demolished in the 1960’s had a date stone of 1844 however above the fireplace was a date of 1642; and the old cowshed has a 19th century date.

An unexploded shell from WW2 was found in the 1970’s above the quarry in Cwmfrân-ganol.

There was a cottage opposite Efail-fach called Rhydyronnen which has now disappeared.

Will and Ann Theophilus 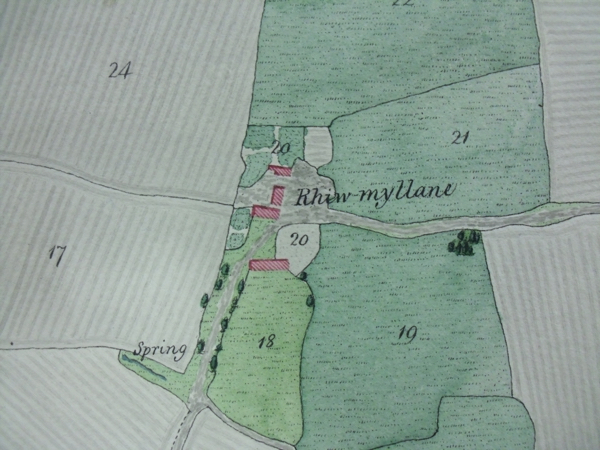 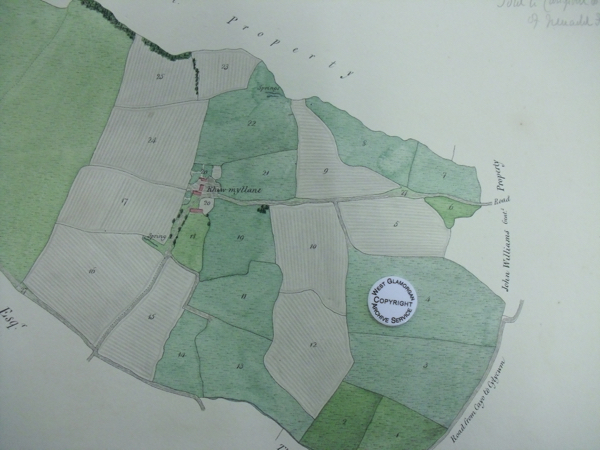