The present farmhouse at Tynywaun was built in 1911 but the remains of old house used now as garage have a date on them of 1787.

Morgan Roderick who lived at Tynywaun during the first part of the twentieth century was renowned for competing and winning competitions in basketmaking and weaving.  He used his winnings to plant fruit trees which remain with many of these apple trees still producing a plentiful harvest.  Interestingly, if he would lose a sheep, he would bury the dead animal and plant a fruit tree on top of the carcase!

During the 1940’s there was an incident when the curtains of the house weren’t closed tightly one night.  Due to the strict regulations at this time of war and bombing raids, they were fined!

As a result of the eviction of families off Epynt (for military purposes during the war), the Davies family arrived in 1940 and still farm there today.

Nant y Graigle  ‘graigle’ means rocky place, geology seems to be close to the surface on this farm.

Cae’r Scybor 2 is now called Cae Glydfer, a name that is derived from  ‘cludwair’, a place where wood is stacked’. A similar name, ‘glydwer’ was used by the Williams family of Dinas-bach.

Cae Warren Fawr Field of the large warren is suggestive of medieval estate land management, but  Cae warren fawr was named  it is believed due to the large warren between Penyfedw border which did produce a lot of rabbits circa 1940’s 1950’s during war period when there were food shortages e.t.c. so it is unlikely that the name implies a historical connection as there was a different name in 1777. 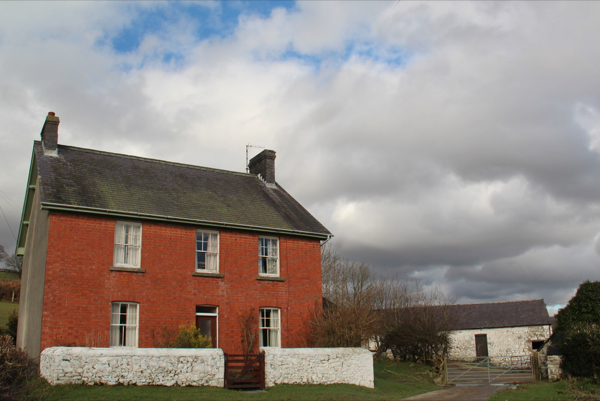