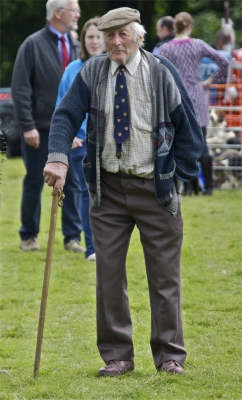 We are gathered to pay our last respects to John Powell Williams, one of the truly iconic members of the community.  John, a much loved, admired revered character, so well known to the agricultural community in which he had spent all his life.  Experiencing its times of celebration and conversely, its times of anguish, John saw it all through its rightful course.

John Powell Williams or J P Williams, as he was affectionately and more widely known, was, once aquainted with, a colossus in stature, and with an intellect to match – for one who had never travelled much beyond the proverbial square mile, and had seemingly no desire or inclination to do so otherwise.

During the earlier part of the last century, his father moved from Myddfai to John’s birthplace in Llwynberllan where he was to live until his short illness earlier this year.  John remained living there after his parents had passed away during the mid fifties, in a close interval to each other

Being community orientated, John was very much part of the local annual events.  He was a charismatic figure adding so much to the local Cilycwm show by his very presence.

Few people are left of his generation, but John was conscious of his record of having attended the Cilycwm show throughout his life.  Some three years ago, being slightly impaired due to his inability to walk, he told the Gate Stewards that he would drive around in the Landrover, the Stewards thought that he would sit and take the weight off his legs for a few hours. However, John proceeded through the gate to drive around the show-field, and then, to the astonishment of show members on the gate, drove straight home stating that he had kept his vow to attend the show every year.

Video clip of John Williams at Cilycwm Show in 2007.

It seems that John’s commitment to his cherished local show had extended to a service in which he had fulfilled all expectations as a member and official for a period in excess of seventy years.  Seventy years of what can be credibly accounted for as service to an institution that meant everything then, and at a time when annual contracts were a very alien term to him.

One time when his towering strength came into its own was a day when forty tons of sugar beet pulp was delivered to Llwynberllan.  One of his helpers took a phone call from him to say that the sugar beet had arrived, at 12 noon.  The helper replied that he was about to have dinner as the scheduled time for the delivery was 1 p.m., but, nevertheless, he said he would be over to help.  John said to him ‘eat your dinner, if there is one thing I cannot tolerate it’s the remotest hint of deficiency or weakness.  This will not be an afternoon for withering, wailing, roses.’

John had a meeting with a well known lady member of the Magistrate’s court who lived in Llandovery during the seventies.  I’m J P Williams he said, as he observed the formalities, to which the lady J.P. replied excitedly, ‘are you indeed – well so am I’, to which John replied, ‘aah!  yes but that is where the gulf lies between us, one day you will no longer be known as a J.P. whereas I will be known as J P for eternity itself.’

Even John’s cattle could claim to be literate.  Starting out at the crack of dawn one summer morning he and his helpers moved the cattle on the road to avoid the early morning traffic and proceeded to go down to Llandovery.  On arriving by Glenwyn’s paper shop, where the road sign said STOP, John’s cattle did exactly that!  Despite John and his helpers best attempts the cattle would not cross the white line and had to be walked all the way back to the barracks in LLwynberllan.

In the sixties John purchased a new Ford Corsair and this coincided with the opening of the Severn Bridge. It was summer and he suggested to his neighbour and life-long friend Brian Jones and wife Ann that he would like to see the newly opened Severn Bridge. The first wet Sunday in the summer would be the time to go.  The ‘Land of Song’ did not disappoint, and soon on a wet and windy Sunday when the rest of the country was basking in sunshine the three of them were on the road in John’s new Corsair with John at the wheel.

After being on the road for well over an hour travelling at John’s customary driving speed, Brecon town apparently no where remotely near, Brian gently suggested that unless John put his foot down they would need a torch and an expensive one at that to find the bridge, let alone see it in its entirety!    John obligingly moved over and soon Brian was taking the car up to speeds that John could only imagine.  Anxiously watching the speedometer John suggested he was driving too fast, Brian asked, ‘do you want to drive?’  John relaxed in the passenger seat and replied ‘keep driving Brian’ but on his return remarked that the speedometer needle on his beloved Corsair had gone where no needle had been before.

John would make his weekly visit on a Saturday evening to the local in Cilycwm village and his neighbour John Tairheol would accompany him.  The two of them would set out on pushbikes with J P insisting the other John cycle on the right-hand side of him to Cilycwm.  The scenario carried on for a number of weeks and when John Tairheol asked him ‘why do you insist on me cycling on the outside?’ J P replied, so I can cycle with my lights off, after all, batteries are not cheap nowadays you know!’

The retiring landlady of the village local, after expressions of goodwill on the part of the patrons to her, John on coming to wish her well, quipped ‘I like you – I don’t know if you like me, but I do like you.’  After a brief stunned silence, rapturous applause ensued to the delight of everyone.

In June 1984, one of the proudest moments in John’s long life was the birth of his son Gareth.  John carried a photograph of Gareth with him everywhere which was proudly shown to friends and the community alike.

Another proud moment was the marriage of Gareth to Laura, of whom he spoke with great pride and affection.  Their wedding celebrations, held on a field in Llwynberllan in August last year, was the culmination of everything J P had hoped for.  For J P, the grand elder statesman, held in such high esteem by the community and the wider circle, it was the ‘icing on the cake’.

John was close to his sisters, Madge, Mildred, Gladys and his nephew William’s family.  Where-ever William travelled he would always send John a postcard; these would be displayed for all visitors to see.

For John it was the local show that was everything and in his own mind if ever there was a fitting epitaph, it must surely be ‘The Show Must Go On’.

The family would like to thank all their friends and everyone present for their kind expressions of goodwill.   Also to thank everyone for their recollections of an individual of which we can definitively state ‘we will never encounter his like again’.

As for the times we met up and spent time with you, well John Powell Williams, Cilycwm’s very own J.P., the pleasure and the privilege was all ours.