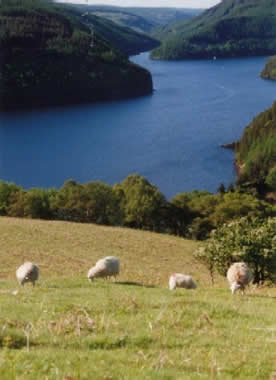 Although several miles to the north of the village of Cil-y-cwm, the building of the Llyn Brianne Dam had many subsequent and profound effects – not only on the inhabitants of the Upper Towi Valley, but also on the lifeline of the Valley, namely the fishing in the River Towi.

Llyn Brianne reservoir was originally built to satisfy the growing demands of heavy industry in and around Swansea for water, notably the tin plate works at Felindre and a smelting plant at Llansamlet. Ironically, both these have since closed down and water from Llyn Brianne which is surplus to the Swansea area’s needs now goes into the general supply, quenching thirsts all the way from Llanelli, across West and South Wales and as far East as Cardiff.

The dam, built with a clay core and rock fill, is believed to be the highest of its type in
Europe. Work started on the reservoir in October 1968, and the first water was supplied in October 1972. Princess Alexandra formally opened the project in mid 1973

In the early 1990’s Welsh Water decided that the investment to make Llyn Brianne produce economically significant amounts of electricity was justified.

Three Francis-pattern turbines were installed in a hydro-electric plant, one capable of handling the normal 1.5 million gallons/day (6800m3) summertime flow from the reservoir This operates all the year round The other, larger, turbines run from November to March, when Winter rains keep the reservoir full, together producing
4.3Mw – enough electricity to power a small town.

The original proposal, to deliver the electricity into the National Grid at Llandovery via a line of pylons down the Towi Valley caused a strong protest from residents and visitors. After a sustained campaign the environmentalists won through and the cable was buried, mainly in a trench cut in and beside the Rhandirmwyn to Llandovery road.