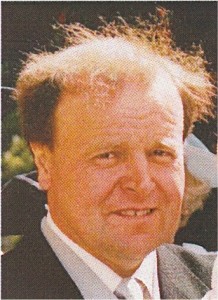 Dad, Dadcu, Price Penlan, Iorweth and even Ted which a Scottish friend used to call him as she couldn’t pronounce Iorwerth.

But to us, the family, he’s better known as Dadcu.  He was a real Dadcu, nothing gave him more pleasure than to spend time with the grandchildren and on those rare occasions when they were all together you could see him beaming with joy.  He took an interest in the lives of each and every-one of his grandchildren.

He went to fetch straw in the lorry once and took quite a few of the grandchildren with him.  On arrival on the farm he jumped out and went to speak to the farmer.  Next thing the passenger door of the lorry opened and the kids started jumping out, one by one.  The farmer looked on in amazement and said “I was wondering when they were going to stop”.  There were about 7 or 8 of them I think.  Dadcu loved every minute he spent with them, and has told that story many times with pride.

As children growing up with Dad there was never a dull moment.  What I remember most is the nights in front of the fire when there was a power cut, so no light or TV.  We’d all sit in the dark and Dad would start telling us stories about his younger days.  Mostly of when he worked with Morgan Gellifelen, or Mock as he was better known.  I think he really cherished that time in his life, and they were great stories.

Dad was a bit of a jokester, most of his pranks were on children, though always harmless but quite funny.  Avril and Eluned Glanrhyd visited Penlan when Avril was learning to drive.  Dad, knowing that Avril would have to reverse the car before she could leave, placed a large stone behind the back wheel, and watched trying not to laugh as Avril looked puzzled as to why the car wouldn’t go back.

He did some kidnapping once, he’d been shearing in Pantycelyn and that evening as he was leaving for home he was to give the girls Lyn Bethan and Nerys a lift, and drop them off at various points to guide the sheep back to their field, as Cecil had no idea where they’d gone.  I think one or two of them did stay in Penlan that night.

When Iwan Rhydwydd was a small boy, Dad told him that placing fertilizer between his toes would help him grow.  Iwan believed him and did just that.

We had a white sheep dog in Penlan, Wag we called him.  Our sheep knew he was a dog and there was no problem handling them but on the mountain Mynydd Mallaen other sheep just thought he was another ewe.  Dad had a brain wave one day (brain waves were regular occurrences to Dad), anyway he decided to try and dye black patches on WAG.  Well needless to say it was a bit of a mess.

Dad didn’t care about mess or a bit of dirt at all.  I can remember going to the Royal Welsh show, we kids would go round with Mam and Dad would spend the whole day on Machinery trade stands.  No he wasn’t talking to the salesmen he was looking at the different machines, and not just the outside, no Dad would be looking inside to see how they all worked.  We’d go and find him at the end of the day, and you could always spot him as he was the one with the black oily shirt, from rubbing against the machines.

He spotted a log splitter once and no, he didn’t enquire about buying it he looked at it and wondered how he could make one.  And that’s what he did on that occasion.  Dad would never buy anything if there was any change he could make it himself.

Dad spent much of his time on sloppy ground, topping, fertilising and anything that needed doing.  He understood the land, and knew what could or couldn’t be done.  But in Dad’s eyes it could mostly be done.  We all thought he was mad and many others around here as well I suspect, but I don’t think he was reckless.  I think he knew what he was doing.  He loved the land so much.  He told Mam once that he wanted to be buried at the peak of Ochor Fforest.  This was years ago and I don’t think it was a very serious conversation as Mam replied “how do you expect me to drag you up there”.  Well next best thing we’ve decided to place you on what was once part of Penlan and you can look up at Ochor Fforest and also keep an eye on what’s happening in Penlan.  Gobethio y bod na yn iawn Dad.

Dad became Dadcu, and boi what a Dadcu.  He’s provided his grandchildren with some entertainment over the years.  No he didn’t take them to theme parks or the cinema he provided it all in Penlan.  My two have spent many weekends and holidays up in Penlan, and each time they come back packed with tales of what they’ve been up to.  My sister told me how her children had enjoyed spending a couple of days lambing in Penlan along with some of the other grandchildren.  What they’d been doing was spinning around in a clapped out red Fiesta which Dad was using to go round the fields feeding sheep.  Usually the boot would be open with kids sitting in that with a couple of dogs in the back seat revelling in the excitement due to all the attention they were getting from the kids.  They were all usually covered in mud, but Dad always said kids looked far happier when they were in the middle of everything, and between you and me my Gareth is following Dadcu very fast as each time he comes back from Penlan he’s usually got a bit more oil on his clothes.

Dad’s tried a bit of everything, he trained a few horses in his time, in recent years he’d trained them in a cart, things were going well one day or were at least I should say when Dad and Tomos were going in the cart up past Tynewydd.  The horse got spooked and bolted up the hedge back, the cart followed and tipped onto its side.  Tomos and Dad fell out and the cart landed back on its feet.  The horse and cart were later found just outside the village here.  Luckily no one was hurt.

These kinds of things were normal occurrences when you were in Dad’s company.  I think it was probably because he tried more crazy things than most, but that was our Dad, our Dadcu.

Dad had recently started keeping pigs; we wondered how such a reasonably intelligent man thought he could make money out of pigs when others had failed.  But recently I’ve realised it wasn’t the money it was the entertainment factor he was after.  There was a litter of 9 and they kept breaking out of the shed and freely range around the yard making a mess.  He kept trying to make the gate more secure so they couldn’t escape but between you and me I don’t think he wanted to stop them from coming out as they were providing him with so much enjoyment watching them running around the yard.

A traditional man, a man of habit of you like, one of his greatest habits was to eat 3 shredded wheat a day, every morning for breakfast.  On one occasion he’d run out, instead of eating something else, Dad jumped in the car and went down to Rhydwydd to ask for some.  Mam made sure he never ran out after that.

Dad had difficulty with the word no.  Whenever anyone called wanting help he’d be there like a shot.  His handy work can be seen in many neighbouring farms.  Of that we can be proud of the man we knew as Dad and Dadcu.

Dad was often doing sums on the calculator, they ranged from how much fuel the car was using to the cost of fattening lambs, and even how much each of us had cost him to raise.  Once he even worked out how many shredded wheat he’d eaten in his lifetime.  So as a tribute to you Dad, I’ve done the final equation.  Estimating you’ve probably eaten 3 a day since you were 16 years old, that’s 50 years, so approximately you’ve eaten 54,750 shredded wheat!

As well as being a traditional man, Dad was a family man.  I remember about 12 years ago Mam was in hospital, she was getting better, no question about that but Dad was completely lost without her.  Family was everything.  He never wrapped us in cotton wool and I think we’re luck he didn’t, because real life isn’t like that.  Real life has good times and bad.  We’re having a bad time now, but we have loads of good memories, many of which made by Dad and we will remember.

Thank you all from Dad and the family.  Diolch.

Recollections by his youngest daughter, Meinir.