by Leslie JonesFor most people, the initials W.W. are synonymous with the magic of William Williams, Pantycelyn, but for me it was the inlaid W.W. inside a bureau-bookcase that cast a magic spell when I first visited the Welsh Folk Museum at St Fagans in the early 1950s. The identity of that W.W. remains a mystery after half a century of intermittent forays.

The intricately inlaid interior, which also includes the date 1805, suggests that the bookcase was made in the Llandovery area. There was a tradition of fine inlaying thereat this time, which is evidenced by the number of inlaid coffrau bach, long-case clocks, etc. which still abound in the area and have undoubtedly found their way to the far corners of the world where Llandoverians have settled.

It would be nice to suppose that the W.W. refers to the maker of the bureau-bookcase, especially since there is a long line of cabinet-makers named Williams in the Cil-y-cwm area, as well as those who appear from time to time in Llandovery town. But it is almost certain that the initials refer to the patron for whom the piece was crafted so beautifully.

Reference to the two volumes of A.T. Arber-Cooke’s detailed history of Llandovery points to the existence of many W.W.s – William Williamses, that is – of note in that town and its immediate environs at the turn of the eighteenth and nineteenth centuries, for whom the piece might have been made.

Surprisingly, research led me to one W.W. who owned the bureau-bookcase prior to its move to St Fagans in 1932. However, that W.W. was not a William Williams, but the Revd W.W. Poole-Hughes, a former warden of Llandovery College. Subsequent research has failed to find another W.W. connection in the Poole-Hughes family history and therefore I would suggest that William Worthington Poole-Hughes, might have bought the piece because the initials matched his own.

The profusion of cabinets from the Cil-y-cwm area is quite phenomenal, and although these pieces are not signed in the literal sense, many bear the ‘signature’ of the individual cabinet-makers in the minutiae of the details. A little chamfer here or a gouge-cut there is tantamount to a signature to the trained eye – and this is never more so than in the case of the Welsh dresser. 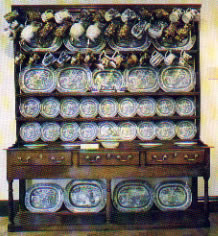 Although regional variations are obvious, the variations at village level can be comparatively small, but one can never never fail to spot a Cil-y-cwm dresser, which stands apart even from an Llandovery dresser.

As far back as the late 18th century, the Cil-y-cwm dresser had appendages that are unique and take the form of clustiau (ears), which is the only way to describe the phenomenon. No one knows how this came about, but since Cil-y-cwm is very much sheep country, where animals are identified by earmarks, it is not unreasonable to assume that an early Williams decided that Cil-y-cwm dressers should be immediately distinguished by their ears.

And so the search goes on. I would be happy indeed to hear from anyone who has a piece of furniture of Cil-y-cwm or Llandovery origin. If you have such a piece, please examine the back of any drawers and if you find either of these pencil marks, please contact me on Llandeilo +(44) 01550 822 748.

P.S. The 1841 and 1851 Census returns show a Williams, cabinet-maker, living in Pantycelyn, Cil-y-cwm. Now, that really is a mystery.

Most of the following information has come from a book by G.W.Hall ‘Metal Mines of Southern Wales’. He quotes that Mynydd Mallaen had been the scene of a good deal of mining activity possibly from pre Roman days. Copper came from behind Cil-y-cwm, probably Cwmgwenlais The recorded places of mining are as follows:

Apart from gold at Pumpsaint this was the most important metal mine in Southern Wales. Recorded sales of the lead amounted to 80,000 tones and it was alleged that 400 people were employed around 1780 Up till 1836 Lord Cawdor was the owner but at this point he was losing money and he therefore leased it to a Cornish company which led to more Cornish workers in the area: