A classic Cil-y-cwm dresser has returned to the village. It was purchased by Dick Turner and Thelma Stenning of Ty Jarman.

Dick says – “By pure luck I got a message from Sara Fox via Dafydd Tomos that there was Cilycwm dresser for sale on Ebay.. It is rare to be able to identify the exact place of origin of something made over 200 years ago so this really is something special. Intrigued I clicked on the link and immediately knew this wonderful piece of furniture had somehow to be brought back to the village. The problem was it was not an auction but a “Buy it Now” which meant that at any moment someone could click on the button and the opportunity would be lost. We already had a dresser – one I had made years ago – but we did have a possible space. The price seemed comparable with other similar dressers for sale, so I sent an email explaining that I wanted to bring it back to the village and would they accept £550 less than the asking price? Much to my surprise, the owner – an antique dealer in Lancashire – was delighted it was coming home, agreed to our offer and will deliver, as long as it is after Christmas. Thelma is sharing the cost, but both of us would prefer someone to offer a more permanent home for it in the village. I’m afraid we can’t afford to donate it – cost price on application.  Anyone interested please contact me.” 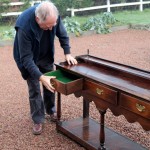 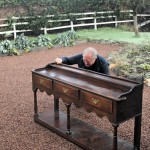 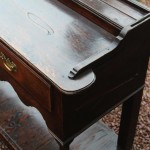 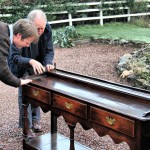 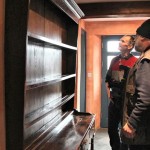 The Cilycwm dresser - being admired by the locals. 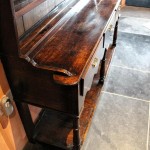 The Cilycwm dresser - in its new home.

Since the arrival of the Cilycwm Dresser to Ty Jarman, Anne Theophilus has kindly loaned me  “Cilycwm as I remember it over the last 70 years”, a document charting the memories of Catherine Dorothea Theophilus (known as Dorrie).  This valuable insight into many past Cilycwm residents identifies the changes of occupancy of many of the village houses.  It helpfully identifies that, according to Dorrie, the Welsh Dresser on show in the Abergwili Museum, Carmarthen was bequeathed by Maggie Lizzie Davies, who lived in “Bryngwenlais” and was organist at the Church for many years.

CATHERINE DOROTHEA THEOPHILUS – with her dresser. 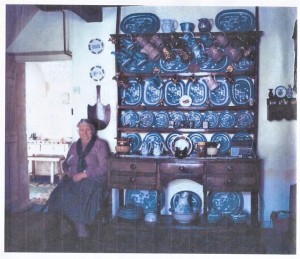 From Ann Dorsett at the Carmarthen Museum; I am afraid that I have very little information about the maker or makers of these dressers. What little I have comes from an article by Bill Cotton on the subject of the Cilycwm dresser for Carmarthenshire Life published in August 2003. His interest was sparked by the sale of a dresser  at the Dukes Dorchester salerooms in 2003. It was catalogued as made by the Williams family of Cilycwm. Subsequent research by Bill Cotton revealed that:

The imposing dresser at Carmarthenshire County Museum is likely to be an early example, having been made in the third quarter of the 18th century.